Launch of the Irish Brain Council

The Irish Brain Council was launched on Tuesday May 28th in the National Convention Centre Dublin (CCD) at the end of a two day EU wide conference on brain research and healthcare hosted by the Irish Government as part of events for its EU presidency. The launch was funded by an advocacy grant from FENS/SfN. 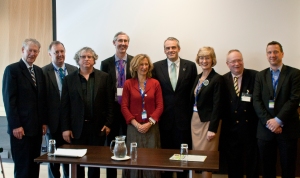 The launch was opened by Micheál O’Muircheartaigh, broadcasting legend and outspoken advocate for neurologically-based research, who introduced each of the speakers with a collection of anecdotes and stories told in his own inimitable and irrepressible style.

Audrey Craven, a founding member of the Council, initiated proceedings with a brief history of the genesis of the council, from early initial meetings in 2010 to its culmination in the launch event itself. President of the newly established Council Dr Richard Roche noted that the Council brings together – for the first time – all the stakeholders including patient groups, clinicians and researchers in a collective effort to advocate for and promote brain research in Ireland.

Formally launching the Council, Mr Enda Connolly, CEO of the Health Research Board, highlighted the importance of an Irish Brain Council. “The European Brain Council has been a very effective advocate to secure funding and prioritisation of brain research in Europe, as demonstrated by the European Month of the Brain and the success of the conference we have hosted here in Dublin over the past two days. Cancer is an example of a very effective advocacy effort which has led to targeted research funding, increased public awareness and reduced stigma. It is time to bring the fight to brain disease and the establishment of the Irish Brain Council is an essential step in this regard”.

Prof David Kaplan from the Brain Canada then outlined the success of their work in securing investment in brain research and creating the public policy framework needed to support research into neurological and psychiatric diseases and their impact. He highlighted that the organisation has secured a commitment from the Canadian government to match their fundraising target of $100m for research in the neurosciences. Brain Canada has also published impact studies into the impact of neurological conditions on Canadian society as well as the case for increased investment in neuroscience research.

Professor Orla Hardiman, another founding member of the Council noted: “Populations are ageing across Europe. Brain Disorders represent what cancer was twenty years ago, a juggernaut facing our healthcare systems and a life changing diagnosis for many. “We need the kind of focus that was put into cancer research here in Ireland. The Irish Brain Council is an important step towards this”. The Irish Brain Council will engage in an active programme of advocacy and awareness events in the run up to and during European Year of the Brain 2014, which takes place next year.